Previous Next
Our 4 Day Overland Tour Of Lesotho 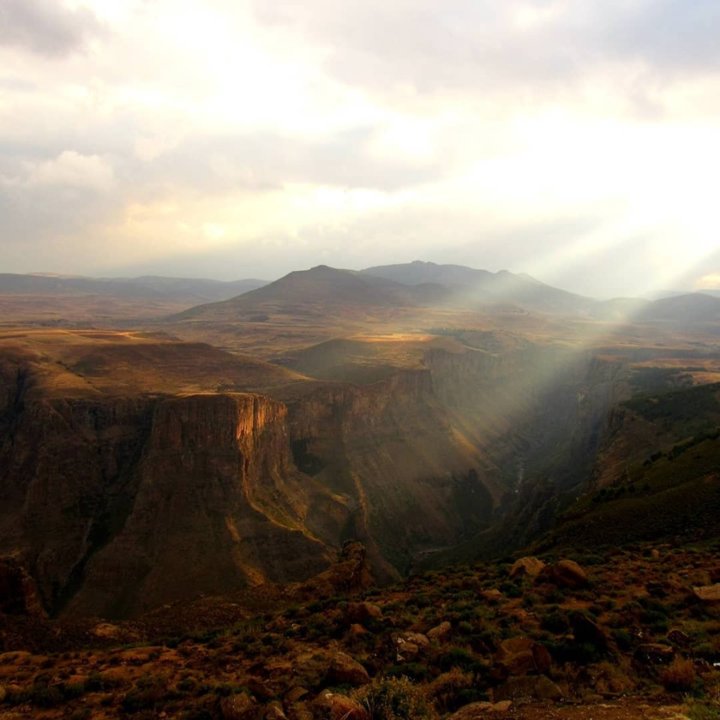 An Overland Tour Of Lesotho.

This is our latest 4 day overland tour around Lesotho and what you can expect if you come and join us. We left Pietermaritzburg in 3 Land rover defenders and 1 Discovery. A real land rover parade. Up the road and on to Underburg where I had hoped to have the best tea and scones at the Rose and Quail in Himeville but they are closed for renovations. Oh well no worries, we had a picnic under the trees near the bottom of the famous Sani pass.

Just a bit further on and there was all sorts of road works. Yup they are “fixing” Sani pass. So far it is only to the South African border post at the bottom but I am sure they will carry on up to the Lesotho border on top of the escarpment. That will be quite a feat!

The pass starts at around 1800m above sea level and you can really see how the scenery and climate change as you drive up the pass. The trees stop growing above 2500m and you can feel the temps drop even in winter. Be prepared. Some people come from all over the world to do some birding as Drakensberg rock jumpers and siskins are found here and the small streams are frozen in winter. As we arrived at the top of the escarpment we did the formalities at the Lesotho border and then a short pop over the Sani pub. Apparently it is the highest pub in Africa.

After a special drink in the highest pub we were on our way further into Lesotho.

The Chinese have made a lovely tar road from the top of Sani far into Lesotho but the mountain scenery is still stunning. We drove over Black mountain which is actually the highest altitude we get to on this trip. At 3240m the views over Lesotho are very special indeed. So from here it is all downhill and villiges start popping up all over as we drop below 2500m. Just before Mohotlong we turn left onto a dirt road and stay at Molumong lodge. It is a lovely but simple place with warm beds and fire places while lit by candles and only a 2 hour drive from Sani top. Don’t expect a restaurant though.

Molumong was used by the Brits in the late 50’s and 60’s and they even played crochet but when Lesotho became independent in 1966 the Lesotho highlands transport closed down. Do you want to hear more? Well you will have to join us on our next trip.

As we drove further into Lesotho so the roads became more ‘fun’.

Monameng pass is quite rough but the views are worth it. Even here as we drive around in our fancy 4×4’s we see the locals driving around in their taxis full of people. Brings us down to earth. Today we drive to Katse dam with a lunch stop just past Thaba Tseka. You may be able to fill up your vehicles here but don’t count on it. Thaba Tseka means “the mountain that is on fire” Apparently the hill is bright orange as the sun rise shines on it. We arrive just in time for afternoon tea.

Katse dam is the highest dam in Africa at about 2200m above sea level.

One of the biggest exports for Lesotho is the trout that they breed in Katse dam. I find this amazing as the trout are from Scotland which is no where near the altitude of Katse but boy do the trout love it here. There is a lodge here but I prefer to stay at the Katse back packers. The rooms only fit 2 people so you are not sharing with a whole lot of snorers. Plus I love to cook and cater because with some effort the food is nicer than a restaurant. Why? Because we put in more passion into our cooking. Yes!

So after a breakfast of pan cakes with bacon and syrup we load up and are off by 8.30. Today is one of my favorite days. We head over to the South and Eastern pats of Lesotho with our destination being Thamatu lodge. It is close to Sehlabathebe National Park which has unfortunately changes it’s name to Drakensberg Moluti park. The original name meant “plateau of shields’ I think because of all the sand stone coming out between the grass.

Thamatu lodge is community run and my guests actually liked this place the most.

Just a quick rant! I often hear people complain about how unfriendly the dogs are as well as how nervous they get when they see a young man riding a horse with a balaclava on. They are not trying to hide their face… it is cold in the mountains and as for the dogs well they are so friendly and would like nothing more than sleeping in your bed with you. You certainly won’t be cold.

There is even a little school here and I am really impressed at how well the Basotho speak English.

Anyway after 3 days of adventure and unbelievable mountain scenery we have to leave this incredible country. I try to think how to describe this place but can’t find the words. You need to come and see for yourself on our next overland tour of Lesotho.

About the Author: Ian Shooter

Southern Africa Ovewrland was started and is owned by Ian Shooter. He will arrange your 4x4 overland tour of South Africa and our neighbouring countries. In conjunction with our sister site, Drakensberg Hiker, we will arrange the best hikes and tours in South and Southern Africa!